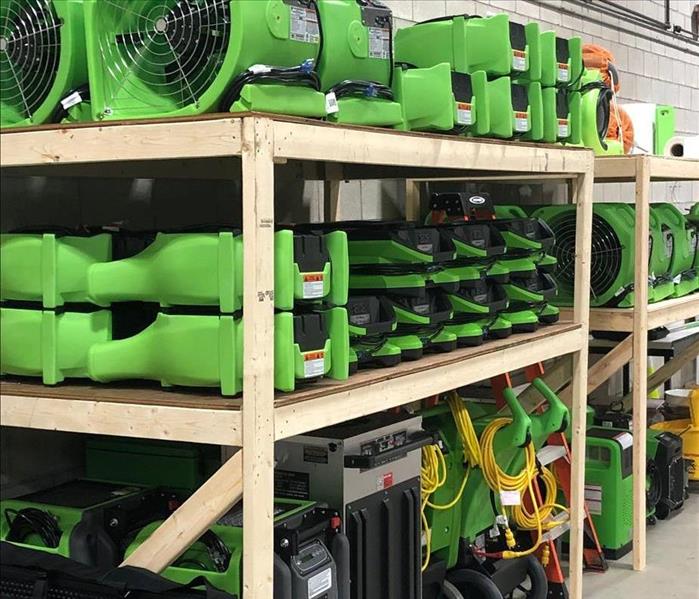 SERVPRO has state of the art equipment to thoroughly dry out your property after a water mishap occurs. Call right away!

Ridgebury is a small suburban township that makes up a part of Ridgefield in Connecticut. The region, which is roughly an hour outside of New York City, has become a popular weekend vacation destination for people living in the large city. The local populace numbers some 24,638 permanent residents, with Ridgebury township making up a fraction of that number. Despite its relatively small size, Ridgebury maintains a strong reputation for its arts and culture, with several of the more flamboyant properties being designed by leading architects such as Raphael Vinoly and Cass Gilbert. Renowned impressionist J Alden Weir was another of Ridgefield's prestigious former residents, and the township maintains the studios of Weir as part of its national park. Contemporary arts and theater are among some of the leading attractions bringing people to Ridgebury, Connecticut.

Ridgebury has a history as an important outpost fought over during the American Revolutionary War. The British first established the town in 1708 but fought over it just under seventy years later in The Battle of Ridgefield. The Main Street Cemetery in Ridgebury pays tribute to soldiers from both sides who lost lives during the skirmish. Connecticut proved to be a key strategic outpost during the war, allowing forces to control the Hudson River. The Keeler Tavern Museum and History Center is one tribute to the Battle of Ridgefield and even has British cannonballs still lodged into the structure from the skirmish. Visitors can receive an in-depth tour of the site, while the permanent collections include eighteenth-century artworks, memorials, and memoirs.

The Aldrich Contemporary Art Museum focuses on providing a platform for some of the East Coasts' most exciting new artists. Rather than host a permanent collection, the Aldrich offers a rotating cast of first exhibitions for contemporary artists. Jasper Johns and Olafur Eliasson are just two prominent artists to have held their first exhibitions at Ridgebury.

The Ridgefield Playhouse and Prospector Theater are two of the main entertainment centers in Ridgebury. Both celebrate the region's love of performance art, with rosters typically covering a wide range of traditional, contemporary, and classic theater. Live concerts for jazz and classical can also be booked. ACT theater is solely dedicated to modern theater.

Seth Low Pierrepont State Park is 300 acres which include the serene Lake Narneka. The lake is open for both fishing and boating. A short drive away is the Hammond Museum and Japanese Stroll Garden. The non-profit features award-winning landscapes, sculptures, and 7-acres of pristinely kept gardens.

SERVPRO in Ridgebury Can Help Restore your Home after Flood Damage

Properties that become flooded due to storms or other natural disasters can be at risk of sustaining permanent damages to their structure. All building assembly elements can be affected by flooding, particularly if the system remains wet for longer periods.

SERVPRO can assist with:

Most residential properties are built on a wooden frame. This framework is the basis from which layers of plaster, gypsum board, drywall, or paint are added. Wood frame is usually dimensional lumber and may not be given a finish or varnish. Exposure to large amounts of water, frames can expand or warp, causing property damage.

Flooding can affect all aspects of a building assembly. Contact SERVPRO of Danbury / Ridgefield for flood damage restoration at (203) 791-0920.